Game 6: vs Rosalind
An easy game as Rosalind had not been playing for a while and was quite rusty. Had to clarify the rules for her as she didn't seem to be familiar with them. She actually requested to play in the recreational division but was refused because of her ratings attained in 1999! Also heard that Kok Onn's request to play in the intermediate division was refused as he only started playing competitively after the LBH cup cut-off date. Guess the ratings system has its limitation to eliminate both under-qualified and over-qualified players in a particular division. 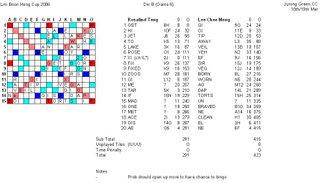 Game 7: vs JoBeth Pan
Was thrashed by JoBeth a few years ago at the NTU open. Had a bingo rack with AEILNRS and played NAILERS back hooking the R to an existing EME but EMER* was challenged off. Could have bingoed by front hooking to an existing TIC on the board! My opponent bingoed three times with tURRETED(62), REALTIES(82), SNORTER(73) and I lost badly! 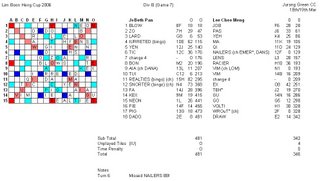 Game 8: vs Peter Yu
My phoney SLINT* was let off as both of us thought it was good. Peter tried to hook an S and I tried to hook a Y and both were challenged off. Later, Peter bingoed twice with SOlDiER(78) and AGONIES(67) and won easily! 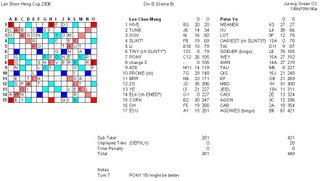 Game 9: vs Lim Shi Min
Had a bye as my opponent did not turn up.

Game 10: vs Sebastien Lim
Start of the King-of-the-Hill round and my second time meeting Sebastien. Both of us had one bingo each. I had TRAiNEE(66) and he had REALISE(68). Was quite confused over what the blank in TRAiNEE represented and played a silly phoney of HiI* which was challenged off. Also made a mistake of not blocking the back hook of MOC next to the TWS cell and allowed my opponent to score with SKEW(57). Just managed to win by 4 points in the end! 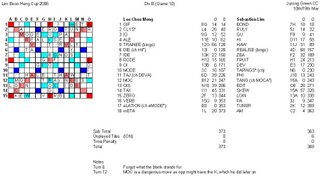 Game 11: vs Catherine
My second time meeting Catherine and thought I had a chance to revenge myself. Couldn't beat her in the end as she bingoed with sTrINGS(72) and scored well while not opening up the board. 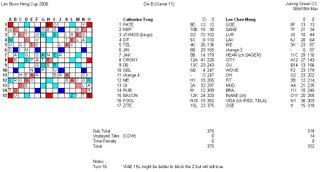 Game 12: vs Peter Yu
My second time meeting Peter and my luck was better this time. Bingoed once with EGOtISE(80) and scored well with the J and the Q. My QUA(38) exposed the TWS cell though and allowed my opponent to score even better with FEINT(48)! Maybe should have played QAT(29) at a safer spot. Was distracted by Rosalind talking to Peter in the middle of the game but was too shy to tell her off as Peter himself didn't complain. Missed a playable bingo with a AILNST? rack at the end but played reasonably well to win. 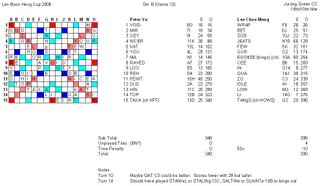 Came in 11th position out of 16 players. Not quite an above average intermediate player yet but I hope to do better the next time to at least make it to the top half of the field!
Posted by jkqxz at 3/19/2006 07:55:00 PM No comments:

Game 1: vs Lim Seng Bock
My first time playing with Seng Bock and I learnt that he was preparing for the upcoming ISBG games. Hmm, someone to look out for when our company takes part in it! Was leading late in the game until my opponent bingoed with PATerNAL(68) using two blanks! Had lots of consonants left and he finished first to add 8 points to his final score to overtake me. 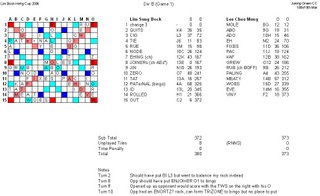 Game 2: Sebastien Lim
Sebastian is Seng Bock's colleague. Was trailing far behind when he bingoed three times in alternate turns: bIPLANE(86), BOILERS(76) and DESTINED(78)! Caught up a little bit when I bingoed with FeNITAR(78) but it was too late! 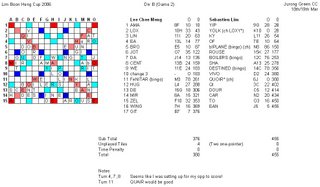 Game 3: Arul
Played with Arul before at the last LBH cup and I think he must be the most well equipped player in the tournament, with his own board, tiles and clock! He even had extra clocks in his bag that he wanted to sell! Managed to make many high score moves including a bingo with READIER(80) back hooking to an existing DEN. Arul bingoed late in the game with eTAERIO(67) but it was too late. Had ABGNOOS for my rack at one time and saw the bingo in it but didn't put it down as I was not sure of it. 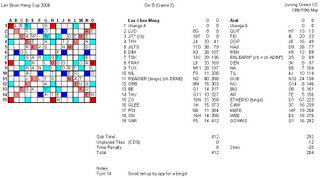 Game 4: Aloysius
Played with Aloysius before at the last Nationals. A bingoless game but I managed to make many high scoring moves while not opening up for my opponent! 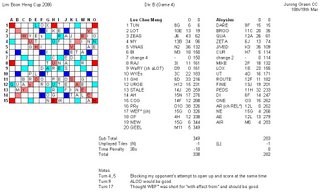 Game 5: Catherine Tong
Played with Catherine before at the NTU open a few years ago. Bingoed first with ASTRIDE(65) and Catherine bingoed later with sINGLES(78). Had AENPSTU on my rack at one turn but missed the two possible anagrams and put UNTAPES* instead that was challenged off! After that, I made many low scoring moves that did not help to open up the board and lost badly in the end. 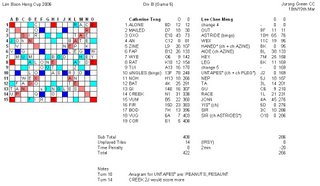 This is a documentary about school children in New York taking a ten week ballroom dancing course and preparing for an inter-school competition in the process.

Liked the interviews with the school children and the teachers! The children were very natural in front of the camera while the teachers explained their expectations of them. The kids look so grown up as they danced beautifully and yet they behave like normal children outside class! I also had fun learning about their plans for the future when they grow up.

Accidentally stumbled on this interesting talk when I was channel surfing. Pheonix TV has a weekly programme where an expert would give a talk on a particular topic to university students with a question and answer session after that.

The topic this week is on 中医的传统与出路 which would roughly translate to the historical value of Tradition Chinese Medicine and its future development. The speaker talked about the different mental models of Western Medicine and Chinese Medicine. Western Medicine breaks the human body into small sub-components so as to pin point the problem and destroy the virus/bacteria that causes the problem. Chinese Medicine treats the human body as a whole system and concentrates on strengthening the body so that the natural defences kick in.

It is also interesting to hear about the speaker's experience during the SARS epidemic and his views on the impending Avian Flu epidemic!

The story, based on Tolstoy's novel of the same title, describes what happened during the war when Napoleon tried to conquer Russia around 1812.

Didn't think I could finish watching such a long film at 208 min but Audrey Hepburn acting in it kept me going. She looked very pretty and she wore beautiful dresses and had elegant posture! Was quite confused over the relationship of some minor characters but I still managed to understand the main storyline. It was also interesting to see the war tactics of the Russian and French army towards the end!

The story is about a beautiful lady, Geum-ja seeking revenge on a man who betrayed her. This is the last part of the revenge trilogy made by the director Park Chan Wook. The film was shown commercially last year, but I missed it because I was having training overseas.

Interesting to note that I happened to watch SFLV on "International Women's Day" as this film is mainly about women. It describes the sisterly friendship made in jail, the dependence of women on men and the love of a mother towards her daughter. Liked the use of flashback that weaved the story together, the voice-over narration that explained the plot and the many different looks of Geum-ja!

The story is about how two cowboys became very good friends when they were working together at Brokeback Mountain. After finishing the work, they went separate ways but still kept in contact once in a while for many years.

Nice guitar soundtrack and beautiful scenery! I also liked watching the animals such as the bear, the elk, the sheep, the horse and the dog! The bear looked extremely ferocious in one scene! It is also interesting to see how the cowboys battle the elements but still manage to have a great time together. They share a dark secret though.

Liked how the film described what happened to each of the cowboys when they went separate ways. Great acting by Michelle Williams especially when she discovered the dark secret of her husband and when she confronted him about it! Liked the well executed ending too!
Posted by jkqxz at 3/04/2006 06:14:00 PM No comments: 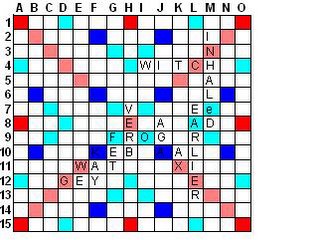 Would like to conduct a poll on what you would do in the above situation.

Your tile is ENOPST?, where would you place your tile?

A) POTS H1 for 36 points with a very good leave of EN?. Quite possible to get a potential bingo on the next turn
B) POSTmEN 5D for 73 points. A safe choice that does not open up the board for your opponent and scores well.
C) NEPOTISm 2H for 74 points to open up two TWS cells. One person gets one TWS cell each. It is also possible for someone score a nine-timer and the person could be yourself.
D) Other choices, please explain
Posted by jkqxz at 3/02/2006 10:08:00 PM 5 comments: