The story is about a group of people trying to steal a precious jade from the exhibition hall while the security guard tries ways and means to prevent that from happening.

Liked the quick MTV-style pacing and the interesting plot that linked the different characters very neatly together! The security guard made pretty good use of his limited resources while the bad guys had many tricks up their sleeves! They engage in a battle of wits and skill together which is exciting to watch!

The story is about how two people are able to communicate with each other despite being separated by a two year gap through a magical post box. This is an adaptation from the Korean film "Il Mare" which starred Jeon Ji Hyun who is the main actress in "My Sassy Girl".

Knew how the story would develop as I had seen "Il Mare" before. So, I wasn't surprised by some of the twists and turns in the plot. It was interesting to see Keanu Reeves and Sandra Bullock collaborate together again since "Speed"! This film is much more quieter than "Speed" but their chemistry remains!

Saw this Fillipino film at the ASEAN film festival at GV Marina. The story is about the struggles of a Chinese Fillipino family to stay together and to preserve their language and tradition.

The story is interesting especially the parts where they showed the grandmother's encounters in China with her in-laws! Learnt quite a bit about Fillipino history and social situation from this film! Great acting by the actresses!

The story is about how the eldest daughter of an Indian family picked up the burden of supporting the family and many unfortunate things happened.

Nice songs and the main actress looked quite pretty! Quite a sad story though as it talks about the sacrifices that she made for the family. Learnt that the director was particularly influenced by the Partition and an Indian poet Tagore. Think Tagore writes pretty good song lyrics!

This is adapted from an actual game to make the board more closed so as to limit the number of choices. 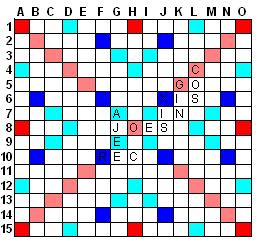 The Blood of a Poet

The story is about the strange adventures of a poet when a statue came alive and asked him to step across the mirror.

Was quite surprised at the beginning when a well built half naked poet is seen drawing a self portrait on the canvas. Guess the director wanted to break the pre-conceived notion that poets are the thin mal-nourished sort. The director had a pretty good imagination and he created many strange happenings! The statue looked quite cool with her short hair!

The story is about a mutiny on the Russian battleship "Potemkin" and the resulting crackdown at Odessa. The communist ideal of "all for one and one for all" is brought across quite strongly in this film.

Watched this 1925 silent film at the Picture House and it was accompanied by a new score composed by Pet Shop Boys. Had a rough idea of the plot as I had borrowed the DVD from Esplanade before, so I was more interested to hear how well the score would fit into the story. The parts where the horns blew and someone stepped on the piano fitted very nicely! The "we are brothers" song did not fit the Odessa sequence too well though as it sounded too mild.

The story which is adapted from a puppet play is about the complex relationship among a married man, his wife and a courtesan that he loves. The man has no money to buy the courtesan's freedom and enters into a suicde pact with her.

Liked the use of black hooded men who adjusted the set in the background! It simulated the puppeteer controlling the actors' actions pretty well! The plot flowed very nicely too! Great acting by the actors and actresses! The courtesan looked just like a doll with the heavy make-up!

How much do you love me?

The story is about a guy's relationship with a prostitute. He claimed to have won the lottery and asked her to live with him for the price of 10000 euros per month. Things became complicated when more people came into the picture.

Interesting look at the many difficult scenarios that people enncounter when they fall in love! Nice witty dialogue that gives food for thought!