Game 1: vs Peter Yu
I first bingoed with DEsTAIN(86) but Peter replied with CHINE(47) down the TWS. Our score was quite close a few turns later until I had an EEIRSZ? rack. It was a bingo-prone rack but there was no place to put it except for a CRIT on board that looked like it had potential for a front hook. I tried SEIZuRE and RESIZEs in consecutive turns to front hook the last letter to CRIT but both were challenged off. By then, Peter had decided to close off the board and I played badly after that. I went over time by 2 minutes and had many low scoring moves. 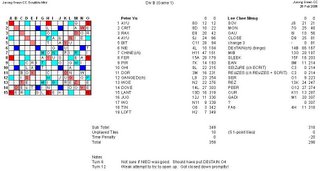 Game 2: Marcus
After Marcus bingoed with EARLIER(78), I got one blank each for the next two turn. I bingoed with INHALeD(74) then got ENOPST? for my next turn. Spent a long time thinking of a 7-letter bingo but couldn't think of any. Finally, I saw an 8-letter one through a floating I on the board to form NEPOTISm(74). 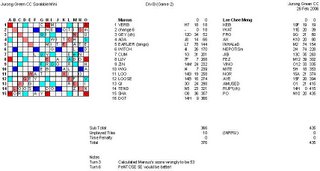 Game 3: Kum Zi Peng
Bingoed twice with BRUISES(75) and DANGERS(71) but lost the lead when I challenged PIOY and PIOYE in succession and ZP bingoed with TOADIEs(78). Managed to overtake him with a RUG set up to score with QAID(34) and BINGS(45) down the TWS line in succession. I lost in the end though as I went over time by 3 minutes and challenged his second last word, HILLO, which was good! 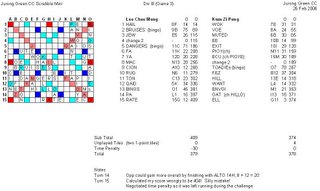 Game 4: Serene Ngu
Got to a bad start when I phoneyed with DOV* while trying to score with the V on the TWL cell. Managed to catch up when Serene phoneyed with CATLINES* which was challenged off and I bingoed with TINTERS(79). I scored very well with the Q with QUAT(52) and was lucky enough to get both blanks late in the game to further capitalise on the Q with the TWS cell. 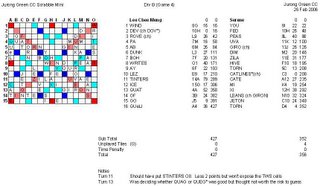 Game 5: Victor Chua
I bingoed with RAVINES(67) and Victor bingoed with TRIPLES(71) shortly after that. The board was quite close after that and I was frustrated with having no place to play my tiles. I played many phoneys that were challenged off while Victor managed to score consistently to maintain his lead. Must learn how to play well in a closed board in the future!

Game 6: Chia Guo Cong
I won Guo Cong during the last Millenium Cup and was feeling confident although I knew that my opponent had very good word knowledge. We made many high scoring moves consecutively at one time! I bingoed first with CREVISE*(80), then he bingoed with RAINDATE(68) that exposed two TWS cells. I scored with DJIN(47) with one of them, Guo Cong scored with QUIM(69) with the other one, then I scored again with ZEX(52)! I bingoed a few turns later with fACTION(77). For my last turn, I had a comfortable lead and I didn't check what tiles my opponent was holding although I was diligently tracking it. In the end, he managed to bingo out with SLAINTE(69) and snatch an extra 16 points from my EHITU? rack to beat me by one point! 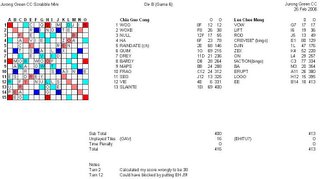 Game 7: Ang Chew Chuah
Started very well with QUEEN(48) and bingoed with BRIDGES(80). I also made many high scoring moves including VARS(38), front hooking "A" to BRIDGES to capitalise on the TWS cell. Should have played AVA for that move as I had an excess of "A"s but I wasn't sure of it. I knew that AVO and AWA were good but was always confused whether AVA and AWO* were valid. Ran out of good tiles near the end and Chew Chuah slowly closed the gap with GoODIES(67), VOX(35) and ZOO(41). 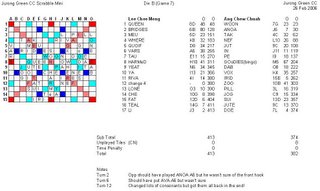 Game 8: Chia Guo Cong
Was quite surprised to play Guo Cong again for the "King-of-the-Hill" round as I was expecting to play against either Peter or Marcus. Once again, he demonstrated his excellent word knowledge as he played VINIC, ENDIRON and BENNY in succession which I challenged the first two unsuccessfully. Managed to pull ahead as I bingoed with TOGGLER(76) and INERTIa(70). I also capitalised on the TWL cell with AH(32) that also served as a set up for SKIT(41) across the TWS cell. Guo Cong could have scored more for his last turn with ROOs back hooking QI with the "s" but he didn't as he was unsure of the word. 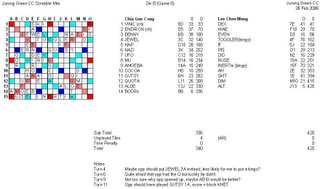 Had fun playing in the mini but was frustrated with the many silly mistakes that I made. Looking forward to the upcoming Lim Boon Heng cup! Hopefully, I would have learnt not to repeat the same mistakes by then!
Posted by jkqxz at 2/26/2006 08:56:00 PM No comments:

This is yet another film adaptation of Jane Austen's novel. The story is about how a poor girl, Fanny Price, was sent to live in her rich relative's house and what happened when she grew up. She kept in contact with her old home by writing letters to her sister. Among her rich relatives, Edmund shares the same interest as her and is her good buddy.

The plot is interesting and I was very impressed by what a good judge of character Fanny was! Liked the way the contents of the letters were presented to the audience in a story-telling style. Fanny and her sister both looked quite pretty!

This is a film adaptation of Jane Austen's novel of the same title about a young single girl who likes to play matchmaker to her friends. Heard that the film "Clueless" is based on the same novel but have not had the chance to watch it yet.

Gwyneth Paltrow plays the title role and I thought she was very meddlesome at first. She had advised her friend, Harriet Smith, to turn down a marriage proposal from a fine young man as he was only a poor farmer! Mr Knightley was a very good friend of hers as he gave her advice when she most needed them.

Emma was trying to match make Harriet Smith for the most part of the film and there were many handsome guys, each with different characters, to choose from. Besides handsome guys, there were also many pretty girls in the film. These include Emma's ex-governess, Mrs Weston, and her friend, Jane Fairfax.

The story is about a diplomat trying to find out the circumstances behind a dark secret. He and his wife were working in Africa where big pharmaceutical companies were helping the Africans test for AIDS and TB.

The flashbacks were used quite effectively to show how the couple met. Great performances by Ralphe Fiennes and Rachel Weisz who played the diplomat couple! The scenery also looked pretty nice in UK and Africa. Was a bit confused over how the dark secret unravelled at first but slowly understood what happened in the end.

The story is about the life of a famous Chinese martial arts expert in China. He fought in matches for fame at first, went through a low period in his life and finally realised the importance of improving himself instead of beating others as well as unity is strength.

Certain parts of the film may not be historically accurate, but the message that violence is not the best solution is brought across positively. The martial arts sequence is nicely choreographed and the village life scenes are pretty interesting too! Also liked the sportsmanship of both contestants in the last battle!

The final collection of British Animation consists of the following films:

"How Mermaids Breed" is pretty interesting and educational. "Killing Time at Home" is a sad story about how old toys get chucked away when people got tired of them. "To Have And To Hold" is an interesting mix of short stories a few days before a meteorite hits the earth. "How To Cope With Death" features "Matrix-like" action sequences of a grandmother!
Posted by jkqxz at 2/12/2006 05:02:00 PM No comments:

Missed Vol 2 and 3 the previous day.

The collection consists of the following films:

Saw "Father and Daughter" at other screenings before and I think it is quite nice! The animation has an impressionistic feel to it with pretty girls riding on the bicycle and nice background music. Also liked the director's previous work: "The Monk and The Fish" that had a similar style.

Besides "FAD", I also liked "Metalstasis", "Intolerance" and "Daddy". "Metalstasis" is about a robot who is sick because there were rats in his body, "Intolerance" is an anthropology study about aliens from the planet Zog and "Daddy" was about how Dad kept the whole family together over the years through vacations on his trusty old car.
Posted by jkqxz at 2/12/2006 03:02:00 PM No comments:

Was deciding whether to stay for the next two screenings of British Animation at Singapore History Museum as Arts House was also having free screenings of Spanish films at the same time. Decided to walk over there and found that they were screening Atame! by Almodovar.

Atame! is an unusual love story between a kidnapper and his victim. Ricky was just released from a mental hospital and the first thing he did was to look up Marina, an actress whom he met a year ago during a one night stand. He kidnapped her to make her slowly fall in love with him so that he could lead a normal life with a job, a wife and kids.

What's interesting is the process by which the couple turn from enemy to friends. The lines were also quite funny. Antonio Banderas acted as Ricky and he looked very young in this film! The actress who played Marina also looked quite pretty!

This collection of British Animation is screened free of charge at the Singapore History Museum. There were five different screenings over two days and this was the first of them.

The following films in vol 1:

Saw "The Wrong Brothers" and "Triangle" before at other screenings and they were quite nice. "The Wrong Brothers" is about two brother's attempt at building a flying machine while "Triangle" is a visual treat about the aesthetics of dance movement and music. Also liked "Hilary" which is a fairy tale told by a father to his child on a strange planet.
Posted by jkqxz at 2/11/2006 03:07:00 PM No comments:

The story is about a tennis coach's (Jonathan Rhys-Meyers) climb up the social ladder and how luck plays a big part in people's life. He married a rich student's sister and had an affair with his brother-in-law's ex-fiancee (Scarlett Johansson) that threatened to get him into trouble.

Great acting by the tennis coach! The plot is very well written and it makes the audience wonder what he would do next and how things would turn out in the end! Scarlett Johansson looks quite pretty too! There is some interesting dialogue but the bad thing is that there is no Chinese subtitles and you need to stay focused to catch what is being said.