The story is about what happens when a guy, Light Yagami, gets possession of a magical note book that belongs to the death god. The owner of the notebook is able to kill anyone he wishes when he writes the victim's name, time and method of death on the book. He uses it to kill off criminals but the police, with the help of L who is an excellent detective, are on the verge of identifying and catching him in the first episode. The story continues in this sequel.

I regretted slightly of not watching the first episode and plunging right into the sequel as I was quite lost at the beginning but managed to deduce who the main characters are as the story progressed. The rules on how the Death Note works just flashed across the screen! Light Yagami's sister Sayu and the pop singer Misa Amane looked very sweet! I also liked the exciting battle of wits between L and Yagami towards the end! I was totally engrossed by it and marvelled at how both sides were able to outwit each other!

The story is about a few days in the life of a general's driver. He accidentally killed the baby that he kidnapped, drove the general's daughter around and took part in a religious procession.

I liked how they panned 360 degrees around to show what's happening in the surroundings and how they simulated the point of view from the driver by blurring some scenes and filtering out some sounds. Also liked the boss's daughter's hairstyle with lots of interesting hair pieces on top!

This consists of 3 short stories. The first is about a mistress falling in love with her lover's servant, the second is about how a young man who is studying in a seminary got infatuated with a young woman, the third is about the unhappy marriage of a wife to a violent policeman.

Read that the Phillipines police wanted to ban the movie because of the third segment as they depicted them in a very bad light. The first segment was pretty straight forward. Liked the dreamy sequences in the second segment and didn't like the violence in the last segment.

The story is about life of a Latino community in Echo Park, Los Angeles. Latino girls celebrate reaching womanhood at the age of 15 years old which gives the title of the film.

Pretty realistic look at how each of the characters spend their free time! Watched my first Mexican film a few years ago and I am still quite amazed at how some of the accent reminds me of "Speedy Gonzalez" which is a cartoon character. The grandfather has exactly such an accent! The two neighbors remind me of Keanu Reeves and Richard Gere! 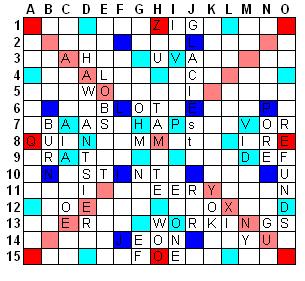 The above board position is from an actual game (last game of the Causeway Cup 2006).

No more tiles in the bag.

Could make it a 10 game win if I won all 5 games today and had a realistic chance of winning 8 games in total. Didn't manage to do that and only won 7 in the end.

Round 16 vs Dinna Lim (Sin)
Lost to her narrowly by 2 points earlier on, so this was my chance for revenge! I bingoed with EARRiNG(69) early in the game but allowed my opponent to catch up when I let go VENE* for 21 points which I genuinely thought was good. EENV has 3 anagrams and none of them starts with V! Lost again 354-355 but at least improved from the previous game. Hmm, maybe I'll draw with her the next time.

Round 17 vs Ho Yue Jing (Mal)
Scored well with QUOTA(77) early on while my opponent bingoed with ENTRIES(62). Later scored with LEERY for 41 points which was challenged unsuccessfully. Won 425-281.

Round 18 vs Valliammah Thamb (Sin)
Had TOADIES(80) early in the game but she came back with QUIVERER(135) and WIRIEST(86). Had ELNNSU? on my rack. Saw tUNNELS and fUNNELS but I needed a bingo that started with a vowel. Tried UNLENdS* but was challenged off. Had SUGAREd(80) later on but was too far behind to catch up. Lost 383-535.

Round 19 vs Ruby Sim (Sin)
Bingoed early in the game with GORIEsT(69). My opponent didn't have a chance as I had QZ, both blanks and all 4 S. Was playing too conservatively in the end as I could have scored more if there were more bingo lines available. Won 419-282.

It was an interesting experience taking part in this competition! The organisers did a good job making sure everything went on as planned although there were some small hiccups along the way! Only pity is that I didn't have the chance to play against players from Thailand, India, the Phillipines and the UK. Hope I'll be able to do that in the next Causeway Cup!
Posted by jkqxz at 12/10/2006 03:36:00 PM No comments:

Round 4 vs Alastair Richards (Aus)
Met another Australian player whose mother was also playing the field. Didn't have a chance at all as he bingoed twice with DOnATED(77) and mEETING(72) consecutively and lost 278-472.

Round 5 vs Tan Jun Horng (Mal)
Was leading until my opponent bingoed with HEROINE back hooking to PIC to form PICE which I challenged unsuccessfully. Lost 334-395.

Round 6 vs Noor Hanis (Sin)
Knew that she won 2nd place in this year's Nationals div C section as I browsed through toucanet during my free time. Pulled ahead when I bingoed with DIETARY(71) which she challenged. She could have formed ZO/ZANY/OE with the Z on the TWL for 69 points and TAX/DA/MUX on the TWS line for 42 points but she missed them. She also went over time by 2 min. Won 397-309.

Round 7 vs Dinna Lim (Sin)
First time playing with this Singaporean player. She pulled ahead with a STOnILY(72)bingo. Would have caught up with a QUIST(76) late in the game if I hadn't spend a lot of time deciding whether it was good or not to go 1 min overtime. Lost 365-367.

Round 8 vs Ganapathy (Sin)
Failed to challenge his opening bingo phoney OUTSEND*(70). Tried to back hook an S to OUTSEND* later to form RECOILS but was challenged off. Narrowed the gap with VOICERs(74) but he widened the gap again with BANTERS(70). Lost 369-491

Round 9 vs Ruby Sim (Sin)
Lost to her in this year's Nationals, so it was time for my revenge! I scored quite well with QUIM(35), JEERED(44) and DITZ(34) while she scored with FAITH(30), WEANS(39) and PAROLE(31). Got my break when she challenged my MIB on the board. Managed to still win narrowly when she finished her tiles first by 345-343.

Round 10 vs Yeap Gim Sai (Mal)
Knew that she won 1st place in this year's Lim Boon Heng div B section. Was playing in the same division but didn't have the chance to play with her then. Both of us had one bingo each with STIPEND(70) from me and STINTER(71) from her. Could have won if I was not too greedy and played HANS back hooking the S to an existing YON on the board. She held for a long time and decided to challenge YONS* which turned out to be no good. Went overtime for my last move and lost 345-350.

Round 11 vs Chen Huang Zhi (Sin)
Both of us had one bingo each, TrOLLERS(79) from him and ANESTRI(75) from me. He was complaining to me all the while about his bad luck throughout the game! Wonder if he says the same things to his other opponents. Won 403-297.

Round 12 vs Ho Yue Jing (Mal)
This Malaysian player wore his school scrabble uniform personalised with his name at the side that looks pretty professional! His good nature was a contrast to my previous opponent. Was more than 100 points behind when he bingoed twice with SNARLERS(70) and LINtERS(65). Managed to overtake him when I bingoed with BRUISING(86) and scored well with ZED(50) and STOW(44). Won 404-375.

Round 13 vs Ismail Kassim (Sin)
Started well with ZETAS(48) and both of us bingoed once each, ROUTInE(70) and MOoDIEST(75) from him. Made a big mistake when I wanted to score with either COD, CON and COL but forgot which one didn't have a front hook. Played CON for 21 points and he played TRAIN for 24 points down the TWS line promptly. Tried to bingo with POLARIED* later but was challenged off. His KRONE(33) and WOXEN(48) sealed the game and I lost 346-381.

Round 14 vs Yeap Gim Sai (Mal)
Had CEIORW? early on in the game. Saw the bingo but didn't know whether it is good or not. Played COW just next to the left TWS line intending to front hook S later on but somehow convinced myself that SCOW may not be good when it was time to play it. Completely didn't have a chance after that when she bingoed with BEAdIER(81) and SPRAINT(75) while I had LORRIEs(62). Lost 360-521.

Round 15 vs Noor Hanis (Sin)
Had a choice of playing the next day but my opponent seemed very enthusiastic to continue so I agreed to play. On retrospect, maybe it was a bad choice as my opponent bingoed twice with STINKING(73) and TASTERS(81) while I phonied twice with ARRETING* and FEETING*. Still had a chance to win if I had blocked the Q spot towards the end of the game but I think I was too tired by then and lost the game 325-353.
Posted by jkqxz at 12/09/2006 11:24:00 PM No comments:

I wanted to take part in at least one international Scrabble tournament before retiring from the Scrabble scene, so playing in the Causeway Cup sounds like a logical choice as it is nearest to Singapore.

Three rounds were played in the Open Division for the first day and we had a Chinese wedding style dinner in between the games. The food was delicious and we heard interesting news of the latest tourist attractions in JB from the guest of honour!

Round 1 vs Diane Ward(Aus)
Got thrashed by this elderly lady from Australia with her REtAINS(71) and INULASE(79) while I phonied at least 3 times with BINO*, VICER* and NARRY*. Had BGIMNOO for my last rack but she blocked the only bingo line. Lost 269-464.

The story is about what happens after a forty-year old man invites four of his lovers to the same meeting place. There are flashbacks to how each of his lovers met him and some philosophical discussions.

The film is a bit slow and I felt that the forty-year old man is pretentious when he said that he is measuring his happy moments with a stop watch. Nice scenery and interesting dance movements though! One of the lovers look quite pretty too!