The story is about what goes into preparing for a robot contest. Satomi joins the school's second robot club to earn extra credits. Their team is very small with only the captain, the chief designer and a mechanic but they are innovative and worked well as a team as time passes.

Quite coincidental that I was playing Jenga just before watching the film as the contest is about robots stacking up blocks. Two teams play against each other at any one time. Each robot has three empty spots to stack their blocks and only the top most block at the end of the time limit scores a point. The team loses a point if it causes the opponent's blocks to fall while trying to stack on top of it.

Was thinking that it might be boring to see robots stack blocks but I couldn't be more wrong! The competition is very exciting with each team cracking their brains to outwit each other! Was totally engrossed by it! I realised that the performance of the machine is only part of the success formula. The ability to think up good strategy to counter the opponent's moves and to improvise when facing unexpected problems contribute to the other parts!

My first game was with Mr Lai from CPF. Had a very closed board and might have won if I didn't miss one bingo but I lost eventually by a narrow margin. 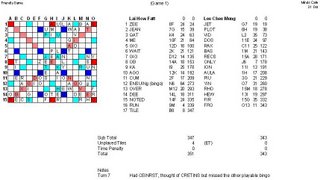 Second game was with the CPF captain. Lost to him two years ago, so this was my chance to take revenge! My tiles were quite good and I managed to bingo twice and win! 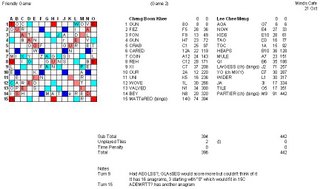 After that, we played Jenga whose objective is to remove one block from the bottom of a pile of blocks and place it on top without causing everything to collapse. Not too challenging as the blocks seem quite stable.

Walked towards National Museum after the game to catch the Japanese Film Festival which is free of charge.
Posted by jkqxz at 10/21/2006 04:26:00 PM No comments:

The story is loosely adapted from the "Hansel and Gretel" fairy tale. A brother and sister are deserted by their family in a forest. They made their way to Spain to find their Uncle but discovered that he is dead. Then, the sister married a rich surgeon and invited the brother to stay with them in a big mansion. Many strange things happened after that.

Liked the modern twist to the fairy tale and its many funny moments! It is very much darker though.

The story is about a little boy, Qiang's stay in a kindergarten and his relationship with the rest of the kids and the teachers. The teacher gives little red flowers to kids who behave well and he longs for them too although he finds it hard to conform to the strict rules.

Pretty interesting to see a day in the life of the kindergarten kids! The day starts with the children waking up and changing their clothes. Then, they go to the toilet together to get rid of the previous day's waste. Quite surprised to see the so called toilet is a narrow stretch of drain that can accomodate more than ten kids squatting down in line simultaneously! The day ends with the teacher wiping the bottom of every kid and sending them to bed. Liked how the process of removing one's clothes as well as wearing socks and shoes is broken down into many detailed steps and presented as a poem!

Great acting by the kids! I got to see the social dynamics and how a non-conformist thinks and feels. Liked how the film mixed reality and Qiang's perception of it seamlessly! Nice ending too!

The story is about how the lives of the people in a small village changed when a whale came to visit in a giant truck. The film begins with a group of drunkards in a bar and the protagonist explains how the sun, the earth and the moon behaves by asking each person to act the role. From the movements of the planets, he explains how a solar eclipse occurs and how animals become irrational during the eclipse period but returns to normal behaviour after that.

Very nice opening as it gives a hint of what is to follow! The protagonist walked from one place to another to run errands and in the process, he discovered that people are gathering in the square and acting mysteriously due to the presence of the whale. Liked the black and white cinematography and the long takes that slowly uncovered the truth! I also liked how the film made us accompany the protagonist along his journey! WH reminds me of "Songs from a Second floor" by Roy Andersson which has a similar theme with equally long takes.

The story is about how a family travelled across the country so that the little daughter can participate in the "Little Miss Sunshine" competition. Along the way, there are conflicts among the family members but they work well together too!

The little daughter look quite cute in the over-sized spectacles! Liked how the family members overcame their differences and worked together towards a common goal!