The Thunder of the Mountain

The story is about a Japanese family that is falling apart. The wife's husband is having an affair and the little sister is leaving her husband. Only the father tries hard to pull everyone together.

Didn't understand how the husband can be so cold and distant when the wife maintains her smile and cares for the family! The home imprisons the wife within instead of becoming a safe haven for her. The whole film is so sad that I felt indifferent about the characters as they are so helpless. Liked the family warmth displayed by the father towards his daughter-in-law though.

Akeelah and the Bee

The story is about how a young girl, Akeelah Anderson, tries to make it to the National Spelling Bee. She comes from a single parent family but she is very good at spelling and playing Scrabble! The school principal knows about her talents and asks a very strict English Professor to coach her. While preparing for the competition, Akeelah has to manage her relationship with her friends, her mother, her siblings and everyone who knows her.

I am already familiar with the rules of the game as I saw a National Spelling Bee documentary, "Spellbound", a few years ago but it is still exciting to watch the kids trying to spell difficult words! I like the human touch in the film! This can be seen in the unconventional methods used by the coach and how Akeelah treats the people around her. It is also funny at times and educational to see unfamiliar words being spelled or being played at a Scrabble game. I learnt new words like FUCHSIA, SOUCHONG, XANTHOSIS*, LOGORRHEA, PLACEBO and LIMN!

I like the ending too that had an interesting twist to it! It made me understand what true sportsmanship is!

The story is loosely adapted from Hamlet but the settings has changed to China during the warlord period. The film describes the complex relationship among the members of the royal family and members of one of the minister's family.

The story is about how man's action created a monster in the river that in turn disrupts the lives of the people staying near it. In particular, the film focuses on a family who stays in a trailer selling food stuff.

Was quite surprised to find out that the first scene where an employee was ordered to pour chemicals into the drain was based on a real incident! The monster looked like an ugly fish but it is as agile as a monkey! Liked how the family stayed together throughout the crisis and how it depicted the authorities ignoring the voice of ordinary folks!

The story is about the life and dreams of a Singapore family that consists of an old couple, their son, their daughter and their son-in-law. Their son also has a girlfriend who lives with them but they are not married yet.

Liked how the film showed the everyday life of Singaporeans. Great acting by the main actors and actresses! Its funny and sad at the same time!

The story is set in Macau, just before Portugal's handover back to China. It describes the budding relationship between a young teenage girl and her father who is a policeman. Her mother has brought her up singlehandedly without the father's knowledge.

I liked the nice music and the beautiful scenery of Macau! Quite interesting to see how the father and daughter interacted with each other after many year's of absence!

The ISBG Scrabble games is held every two years, for statutory boards to take part in a friendly game of Scrabble. It was held at the LTA Staff Club on 2nd September 2006 from 10am to 4.30pm.

Here's my match report, with quizzes marked with [number] and the answers given at the end of the report.

Our first game was against CPF which was the team that I most wanted to play with!

Game 1: CPF
My opponent was a jovial girl whose name was June. She claimed to be new to the game but she is pretty quick at calculating the scores! I calculated the score for one word wrongly as I mistook the double letter score to be a triple letter score and she promptly pointed out the mistake.

Had a pretty easy time as I scored well with ZEIN(69), HOMES(42), QI(36), WEN(39) and GOY(35). I also bingoed with PANTeRS(70) and got away with LICY*. My opponent had no bingos and none of her words scored more than 30 points. It was only after the game that she found out that LICY* was a phoney and she shouted "Ni Pian Wo!" at me subsequently. Was quite embarassed as I was worried that people might wonder what serious sins I have committed for her to say that! 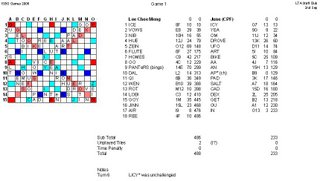 Our second game was against EDB. One of the players was my school mate!

Game 2: EDB
My opponent started strongly with FAH(31) after I put down OYE. Then I started to lead when I bingoed with EVASION(82). I scored well with KIB(30), FOE(35), MAZE(40), JARrED(58) and OX(36). Was challenged for ONY when I front hooked OX to an existing NY. Heard my opp remark the phrase "ONY is only in Collins" several times to himself when the challenge was unsuccessful.

Made a mistake of opening up the board and allowed my opponent to narrow the spread with a bingo of UNGATEd(78) but I still managed to win. 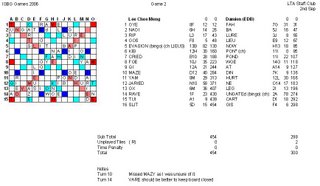 Lunch was provided by the organisers. It was not very good! After lunch, my third draw resulted in my team playing against NP. An important match for us as a win would guarantee at least a second place.

Game 3: NP
I was matched against Winston Gwee whom I have played several times before. Our scores were very close when he bingoed with DiVINES(76) and I bingoed with STORIES(77). I widened the gap when he tried twice to form a bingo with an ENRTTU? rack but was unsuccessful. He tried STUNTERs* and OUTRENTs* but both were challenged off. There are two 7-letter bingos if we treat the blank as an S[1] and two 8-letter bingos through a floating S[2] with the blank as something else which he failed to see.

I got the Q, X and Z very late in the game but was lucky to be able to put all of them down thanks to a phoney that my opp put down which I chose not to challenge. He formed WED/NUD* which allowed me to form WIZ and then QAID later. Would definitely have lost if I had to eat both the Q and the Z which would minus 40 points from my score instead of scoring more than 50 points with them. 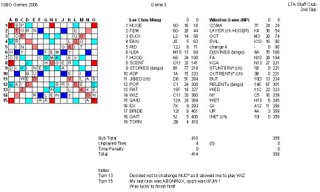 Our final game was once again against EDB. They had one player short, so it was important that our lineup does not result in our best player playing against the missing player. I made a bad choice of lineup and the exact thing that we wanted to avoid happened!

My opp bingoed with HALVERS(78) and I almost caught up when I bingoed with ELATiON(68). Was plaqued with consonants after that and I lost inspiration on what to do. Tried to open up but my opp extended his lead when he bingoed with DUCTiLE(83). Played badly and made many low scoring moves to end the game. 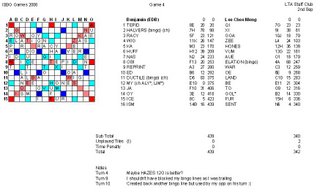