The story is about a single middle aged man, Don, going on a journey to visit his old girlfriends. His girlfriend just left him and he received a mysterious letter saying that he has a nineteen year old son who may be looking for him. His friend, Winston, who is a self professed amateur detective persuaded Don to go on this journey to find out who is the mother.

Don is a very bored guy who watches TV and listens to music all day. During this journey, he visited four of his old girlfriends: Laura, Dora, Carmen and Penny. It is interesting to see how the different characters are living their lives after twenty years, which is a bit like a class reunion.

Besides the part about meeting up, I also liked how the director shows him sitting on the plane full of strangers or finding his way on his rented car. The journey itself is fun! The dream sequences by Don about what happened in the day looked quite cool! The ending is pretty interesting too! Hmm, reminds me a bit of "Lost In Translation".

I had set myself several goals prior to this competition:
1) Win 50% of my games
Failed. I won 6 games out of 15 excluding the bye, equivalent to 40% of the games.

2) Come in top half of the competition
Failed. I came in 9th out of 11 players. Need to win at least 3 more games to be 5th.

Here are the statistics:

Game 7: vs Victor Chua
Wanted to put LET front hooking the T to OHO early in the game but chickened out as I was only half sure. Later in the game, Victor was able to use that spot to bingo CRINGES, front hooking with the S. Lost as my opponent made two bingos and many other high score moves. I also missed his phoney on his last move. 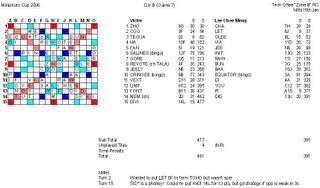 Game 8: vs Bee Tiang
Might have seen THINGIER in SA News on the way here but have forgotten about it and gave 5 extra points to my opponent. 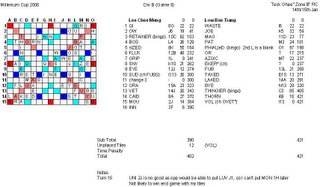 Game 9: vs Ismail
Thought I scored quite well with YETIS(47) 14K but Ismail did better with QUA(48) 13M! The end game was quite squeezed with little place to put any tiles but my opponent was still able to find spots for his Z and V on his rack. 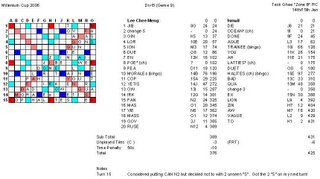 Game 10: vs Chew Chuah
Lost as my opponent made many high scoring moves! 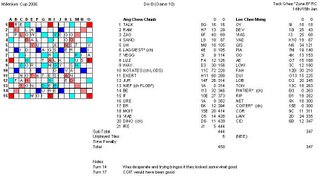 Game 12: vs Bee Tiang
Managed to catch quite a few phoneys but failed to challenge WOR* on my opponent's second last move! Might have won if I had done so! 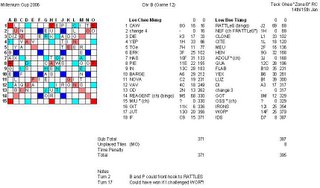 Game 13: vs Bee Tiang
Got away with MALTERS* and would have lost if my opponent had challenged. 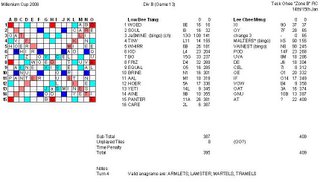 Game 14: vs Bee Tiang
Was able to bingo and made a few high score moves. My opponent had bad tiles and couldn't score well. 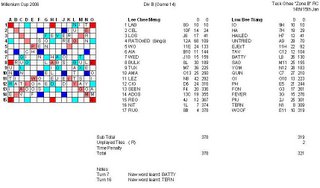 Game 15: vs Bee Tiang
My opponent bingoed on his very first move with WHARFED(89) and I had to play catch up from then on. Luckily, my tiles were good and I overtook him with quite a few high scoring moves. 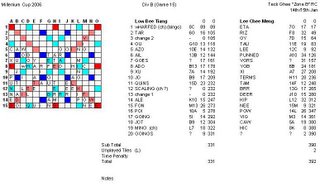 Game 16: vs Bee Tiang
Won by having two bingos that offseted my opponent's high score moves! 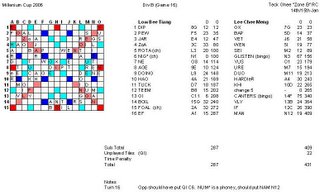 I joined the Millenium Cup this year as I wanted to complete all the major Scrabble competitions in Singapore. I took part in the NTU Open, the Singapore Open, the Lim Boon Heng Cup in 2004 and the Singapore Nationals in 2005. This year's Millenium Cup is held at the Teck Ghee "Zone B" RC and it was my first time going there.

A total of 21 players took part with the top ten in division A while the rest in division B. I was placed in division B and the format was round robin and five rounds of King of the Hill.

Game 1: vs Lim Li Wei
Li Wei pulled ahead after he scored his second bingo. I had ACI?RST shortly after but had no place to put it. Saw a bingo line in the middle with a "G" at H8 and "EE" at 9I, so I tried GRACIeST* (86). Li Wei didn't challenge even though he knew it was a phoney as it allowed him to play DONSIEST(85) 15A. 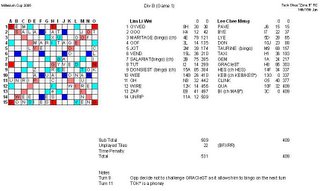 
Game 2: Peter Tay
Our scores are very close until I put down JIN N2 hooking to XI M3. I knew that all the "O"s and "D"s have been used up, so I thought the TWS cell would be safe. Realised that I missed out another possibility when I drew the last blank from the bag after my turn. Was able to score with FAdE(40) and pull ahead to win! 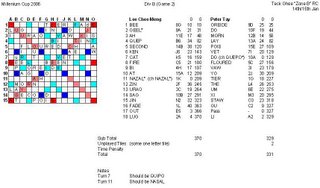 
Game 3: Valli
The board was very closed after the first 3 moves of BOXED, META and WAT all stacked nicely one above each other. I changed tiles several times with no idea what to do next as both of us were unwilling to open up. Scored quite high with a phoney YROW* later which I thought I have seen on my 3 letter hook list. My eye sight must be getting worse as I now realised that it was VROW on the list. Hmm, maybe I shouldn't have saved paper by printing four pages on one sheet of paper. 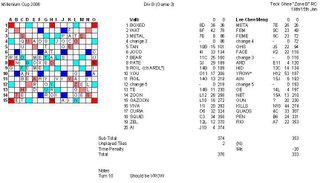 Game 4: Chia Guo Cong
We had an exciting game with lots of high scoring plays and finished the game in just 11 turns! I had very good tiles and was able to bingo easily with simple words. Had AENOSRTU at one time and I was trying very hard to fit what I thought was a potential bingo, UNROASTED*, through an existing D in O8. Was very puzzled why it did not fit until I realised that I had overdrawn and the S was taken away from me. Luckily, it was still my turn and I was able to bingo with OUTLEARN through an existing L on the board.

Guo Cong had only 2 bingos but he scored very high with non-bingo words! It was unlucky that he drew the X on his last move and I was able to bingo out with DEFECATE(98) down the triple score line. 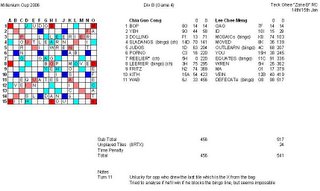 Game 5: Shanthikumar
Was trailing behind after Shanthikumar scored his bingo. Thought I could have caught up if I hadn't tried to hook R to an existing QUITE on the board and got no points for that turn. He let go my phoney FELDS(35) on the last turn as it allowed him to bingo out with REJOINED(117) which is the high word of the day. 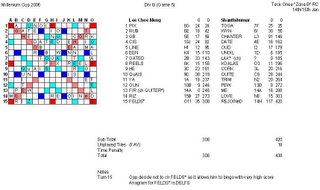 Game 6: Zi Peng
Had no chance of catching up as Zi Peng scored two bingos early in the game. Bingoed with TAINTED(76) but it was immediately followed by Zi Peng's GALORES(74). Lost badly in the end. 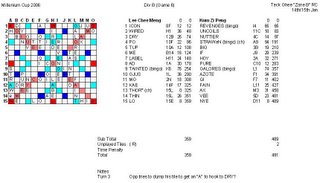 LGV is about the journey of a son and father on a pilgrimage from France to Mecca by car. Along the way, they met many interesting people and had their fair share of adventure together.

One of my favorite reality show is "The Amazing Race" that features eleven teams of couples racing around the world for the prize of one million dollars. This film is something like it except that only one team is featured and the objective is to reach Mecca.

Just like TAR, there are also detours and roadblocks along the way. They detoured from the highway to go on the small roads and some incidents caused them considerable delay. Liked the beautiful scenery and the nice verses quoted by the father to his son!

The story is about the lives of people working in a theme park in Beijing. The theme park has many miniature building models of famous monuments around the world.

The park looks beautiful and performances with dancers dressed in the national costumes of various countries are interesting! The personal life of these dancers are not so glamorous though. Their workplace is crammed and they don't have a chance to actually travel around the world.

Liked the depiction of the friendship between Xiao Tao and a Russian dancer. They managed to become friends despite not sharing the same language. Also liked the short animation clips shown in between scenes!

"3 Feet Apart" is a funny animation about the love story between a boy born with a handphone in his head and a girl born with speakers in her ears! They have to stay 3 feet apart otherwise a loud noise would be emitted from the speaker.

"Birthday", "Locust", "Mother" and "While You Sleep" are the more abstract pieces that focuses more on the emotions of the characters rather than the storyline. "Birthday" was a bit boring at times. Liked how "Locust" and "Mother" flash images while a narrator tells the story in the background. I also liked the black and white cinematography in "While You Sleep" and its minimalist style.

The rest of the films are: "Autograph Book", "The Secret Heaven", "The Call Home" and "Moving House". "Autograph Book" is interesting as they have people act out what they wrote in their friend's autograph book! "The Secret Heaven" had a cute little girl as the protagonist. "The Call Home" shows quite realistically the life of a foreign worker living in Singapore. "Moving House" is a touching documentary about a family moving their ancestors's remains to the crematorium as legislated by the government. The director of MH is very good at capturing people's emotions and I felt how sad the family were at losing their old traditions.

The story is about the life of a Korean, Kim Shun Pei, who emigrated to Japan in the early 1920s and started a family there. He is a very violent man and often hits his family members and workers for no reason at all.

The reason for Kim's violence is not explained but we see how his family members and workers are affected by him through many interesting anecdotes described by the film. The actor who plays Kim, Kitano Takeshi, is perfect for this role with his cool poker face look!

The cinematography is nice with breath-taking scenery and I learnt some basic lessons in 20th century history from the film. It showed soldiers going to war during the Second World War, the rising popularity of communism and the split of the Korean Peninsula resulting in Koreans going back from Japan to North Korea.