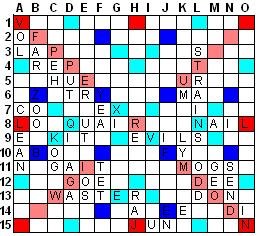 The above board is taken from an actual game.

Game 6: vs Low Bee Tiang
Could have formed a bingo with ADENORS on my rack and a floating "L" on the board to surge ahead but didn't. I actually thought of the word but decided that it had high chance to be a phoney. After my opponent bingoed with BERTHING(74), I should have just used up the TWS line with my "K" on my rack to form KEB 1A instead of KITED 4A for less points. Allowed my opponent to score twice with the TWS line with AMOK and BINGOS after that. A late VOX(42) managed to narrow the gap but still lost. 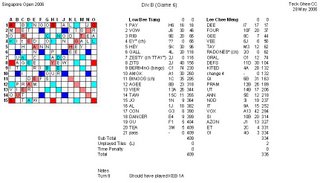 Game 7: vs Tan Yao Zhong
Played with Yao Zhong during last year's Nationals and he seems to have grown bigger and taller. Both of us got one bingo each. I played STAINED(82) while my opponent played TAVERNS(96). Was quite surprised that the bag emptied sooner than expected and my tracking seems far off than usual. Realised after the game that about four or five tiles were missing including the blank! It was too late to do anything then but we helped to replace the missing tiles from the spare bag. 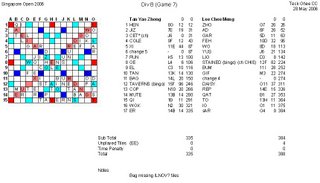 Game 8: vs Valli
Was frustrated with a very closed board until I decided to open up with EATING 14I. Suddenly, three TWS lines were available at the same time and I was able to score well with FISH O12. Valli was able to score on the other two TWS lines though with EXPOS and JOBS. She also bingoed with LEANEST(66) and won the game. 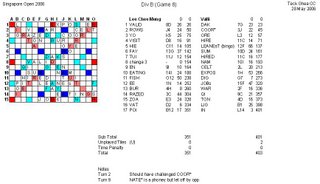 Game 9: Bye
Not really sure whether to feel happy about having a bye as this means that I play one less game than I am entitled to. Had fun walking around helping people check challenged words! Saw Bee Tiang missing an opening bingo with a AIORTU? rack where he put OUTRAIn* and Serene missing a closing bingo with a AELPRSU rack where she put PAULERS*.

Game 10: vs Valli
Surprised to meet Valli in the KOTH round as I thought she should be somewhere on top of the field, way out of my league. I bingoed with TRAILED(66) while Valli bingoed with FLEECING(82). She missed a few turns trying for a bingo but was challenged off. It was a very closed board towards the end and I decided to open up. Turned out to be a bad decision as she promptly put down REQUITS(105) back hooking the T to an existing VAU. Later, she scored with FITS(46) underneath REQUITS across the TWS line and won convincingly. 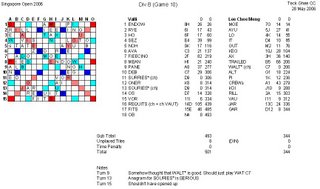 Game 11: vs Peter Yu
A game that is full of bingos! I bingoed twice with INEARTH(87) and TIRADES(78) while Peter bingoed with SNORTER(65) and SUCTIONS(61). Held a ACEINO? rack on one turn but wasted it on a phoney with ACONISE*. Drew many high scoring tiles towards the end and counted that there were exactly 7 tiles left in the bag. Changed my tiles and left Peter stuck with them towards the end to give me the game. 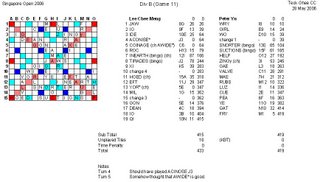 Game 12: vs Low Bee Tiang
Second time playing with Bee Tiang. Once again, I got an ACEINO? rack on one turn. Luckily, Winston helped me check the anagrams for it with his PDA just before the game and I played ACONITE(70). Didn't have many high scoring moves after that but managed to maintain my lead towards the end. 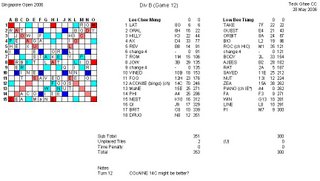 The story is about the adventures of a group of forest animals who found themselves in an urban neighborhood after waking up from hibernation. An outsider raccoon became friends with them and taught them how to steal food from the humans.

Interesting to see the conflict between the raccoon and the existing leader of the forest animals who is a turtle. One is adventurous while the other is cautious by nature. The plan that they came up with towards the end is also very ingenious!

This is my first time playing Scrabble in Teck Ghee CC. Didn't have much trouble locating it as I have a street directory with the bus stop information in my bag.

Saw many familiar faces as I reached there: Marcus, JoBeth, Valli and Peter Tay to name a few. Haven't seen Peter Tay for a long while since the last time I played him in the Millenium Cup, so was quite happy to be able to play with him again. Found out that I was playing with him for my first game after the organisers did the pairings.

Game 1: vs Peter Tay
Learnt many new words from Peter Tay. Spent a long time deciding whether to put FIBRE or FIBER across a TWS line and was still shuffling the tiles around after I put down the word until I decided that FIBRE looks more right. Catherine who was observing the game at the side told me that both words were valid after I pressed the clock. Lost as Peter bingoed with INTAKES(91) and made many high scoring moves. 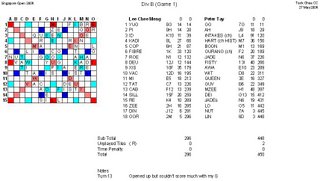 Game 2: vs Chua Zhong Jie
My favorite move in this game would be FLORA N9, back hooking the "O" to ROT. Was unsure of ROTO, so was glad that it turned out to be good when challenged! Felt great when I was able to score very well with JILT 15L across the TWS line back hooking the "L" to FLORA on my next turn! Was still able to keep the lead and win when my opponent bingoed late in the game with WEARIES(67). (Short quiz: There is a valid anagram for MANKIES*. Can you guess what that is?) 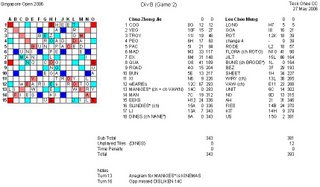 Game 3: vs Victor Gwee
Was totally out of luck in this game! Had the "J" and the "Z", but Victor had both blanks, all four "S" and the "K", "Q" and "X". Made a very silly mistake when Victor put down HaX* M3 next to an existing CLAW L3 and PAN K5. I challenged it off but made no attempt to block it as I thought HeX would be safe as Le* would not be good. Victor promptly put HoX on his next move to score! He won with many high scoring moves and two bingos: TANNERS(66) and SENATES(89). 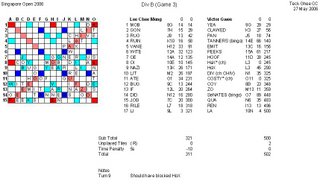 Game 4: vs Ong Wen Hong
Fell behind when my opponent put down ENZYME(44) for his first move but caught up as I made two bingos PRINTERS(74) and TINIEST(71). My opponent replied with DRAINED(76) and with all the remaining "O"s on his rack, he did a pretty good setup with JUT N1. I attempted to block with UG 2N but realised later that he could also have the "G" and the "U" on his rack to form a 3-letter J word. Luckily he didn't see that word and I got away with a comfortable win! 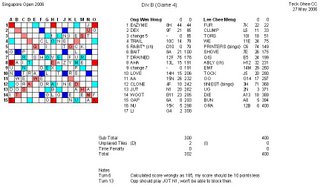 Game 5: vs Winston Gwee
I started very well with QUAIR(48) but Winston was able to catch up when he bingoed with STRAINS(74). He could have overtook me if he had not wasted a few moves playing phoneys that were challenged off. A nail biting finish and I was just able to edge him out for a win! Probably worth analysing the end game to see if there were more optimal scoring moves. 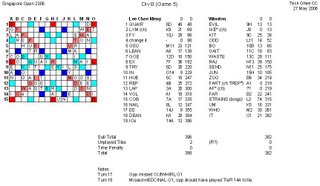 Ended the first day pretty well with 3 wins out of 5 although my spread is terrible. Hope to do better the next day!

Just a small quiz on players in the Scrabble scene:
Guess which player has the favorite phrase: "I am one hundred percent sure!".

I hear him say that so often that I could subconciously hear him shouting out that phrase whenever I think about Scrabble. If you have no idea who he is, just ask any active intermediate player and they'll know straight away!
Posted by jkqxz at 5/27/2006 05:55:00 PM 2 comments:

The story is about Tom Hanks and Audrey Tautou stumbling upon an encoded dark secret and going on a treasure hunt to solve it. Tom Hanks is a renowned author on interpreting symbols while Audrey Tautou is a cryptology expert from the police whose grandfather was murdered.

The puzzles are interesting but it is almost impossible for the audience to solve without any background knowledge so didn't have the opportunity to try to beat the characters in solving them. A lot of screen time is devoted to explain this background knowledge and resulted in too much information overload. Not as exciting as "National Treasure" in terms of the clue solving or "M:I:III" in terms of action sequences. Nice indoor scenery of the churches and the museum though!

The story is about the adventures of a group of special agents working in the IMF, the Impossible Mission Force. Ethan Hunt, played by Tom Cruise, is a veteran planning to retire and have a peaceful life with his girlfriend but decides to take part in a mission when he is asked to.

Great action and very nice teamwork displayed! Especially liked the sequence in the Vatican where the plan is superbly executed! Also like the nice scenery shots in Shanghai.

The story is about the life of a group of professors in a small college. One of the female professors, Eun Suk, played by Moon So Ri, has a dark secret with a new professor played by Ji Jin Hee who just joined them.

Understood the film better when I realised that the original Korean title is "The Discreet Charm of a Female Professor" from Variety's Review, similar to Bunuel's The Discreet Charm of the Bourgeosie. Just like TDCB, there are lots of black humour, flashbacks and scenes that doesn't make sense at all!

The story is about the life of a teenage couple, Sonia and Bruno, who are very poor. Sonia just got a baby and Bruno lies and steals to survive.

Felt that Bruno is not as evil as I originally imagined. Although he steals and lies, he still cares very much for his girlfriend and his little buddy. Interesting to see him busy pushing the pram around, crossing the busy highway and bargaining deals with people. Was very surprised at the lack of face to face interaction during some of the transactions!

Incidentally, the girlfriend in "Crime and Punishment" is also called Sonia. The director may be paying tribute to this novel with this film.

The story is about the events leading to the election of a new Triad chief in Hong Kong. The current Triad chief's godson, Jimmy, had wanted to do business in China and not take part in the election, but he found that he could enjoy special privileges if he became the Triad chief and changed his mind.

Interesting to see the power struggle between Lok, the current Triad chief, and Jimmy. They talked to influential people to garner support, eliminated people in their way and used money and violence to get things done. Very ruthless people who would do anything to get elected! Nice ending that showed that winning the election is not everything and there are consequences attached to it!