Game 5: Peter Tay Yap Tong
I was leading with a RATLINe (66) bingo until Peter bingoed with SEASING (92) by front hooking to my CRY. Then I had EINSUV? that I could back hook to M. Didn’t manage to think of the two common anagrams and was hoping to form a word with UN?IVES. I went through all the alphabets in my head and was deciding between D, G, H, L or W for the blank. In the end, I chose UNhIVES (72) and it happened to be good when challenged! Peter replied with WINER* O1 to form MUR* but I thought it was valid and did not challenge it. 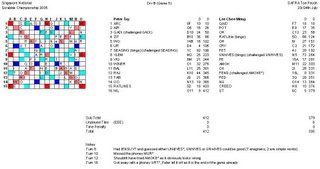 Game 6: Teo Teow Koon
Both of us had one bingo each. I had ENTERED (65) while Teow Koon had SNoRING (85). Won by getting away with IFFS* and scoring well with the Q, X and Z. 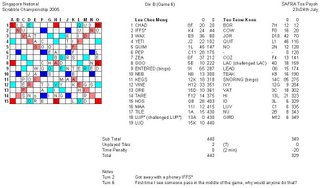 Game 7: Aaron Lee Kin
After I bingoed with EtESiAN (85), we began an exchange of challenges. I challenged his STUNGED*, GLITE*, WER*, SCADE* and MER*. He challenged my VOR and RAXES. I missed his HAX* for 47 points though. 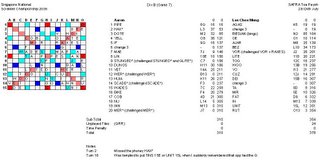 Game 8: Peter Yu
Peter bingoed with NAILERS (83) and could have two more if he knew the right anagram. He put down NATTIES* instead of SATINET and BUILtER* instead of BUILdER. Managed to capitalize on the Z with ZEINS for 87 points but still lost in the end. 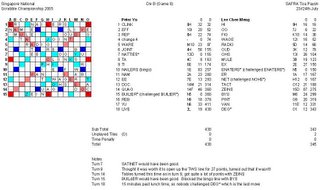 Game 9: Tan Yao Zhong
I made a very silly mistake when my opponent put down DEAlTING* (lower case L to represent the blank). Not only did I fail to challenge it, I also mistook the total score that my opponent announced to be the word score. Instead of 72 points, I recorded that turn as 98 points! Gave away 26 points for no reason at all! Yao Zhong could have another bingo with AEIFNST but he chose to back hook to an existing NE with NAIFEST to form NEN* which was challenged off. 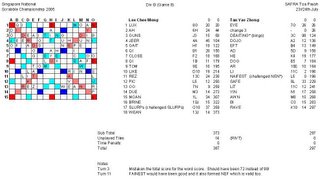 Game 10: Valliammah Thambiayah
I bingoed with TOASTER (66) and OTARInE (75) while Valliammah bingoed with SPELLING (86). She scored high with the Q and Z, while I scored high with the J. Our score was dead even at some point in time. I think she got impatient and tried to score high with SHINTED* but it was challenged off. I learnt a new word from her later when she back hooked FUND with SHINE to form FUNDI. 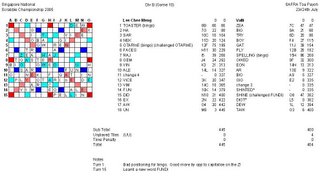 Game 11: Serene Ngu
Serene bingoed on her very first turn with UNOILED (75). I tried TORRIED* in the middle of the game but it was challenged off. The board was quite closed and I had a bingo on my rack at one point in time but had no place to play it. In the end, I got thrashed by Serene for almost 180 points. 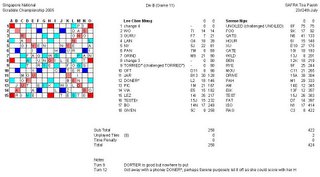 Game 12: S. Shanthikumar
Challenged off BEGINING* at the start but Shanthikumar got another bingo with INSpIRE (73) through my CRY. I played badly in the end game when I allowed my opponent to score high with his C, V and X left on his rack and lost by over 100 points. 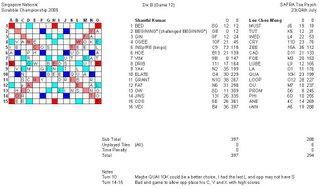 I was happy to have the chance to play against masters players like Peter Tay Yap Tong, Serene Ngu and M. Ganapathy. It is a pity that I didn’t have the chance to engage in a battle of wits against up-and-coming players like Kian Boon, Zi Peng, Victor and Marcus. Hopefully, I could play with them in the future!
Posted by jkqxz at 7/24/2005 11:16:00 PM